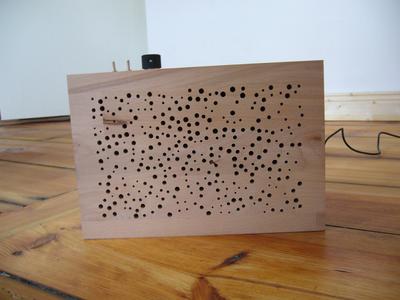 Radio due is a (digital) radio, that only plays the two stations we most of the time listen to at home. There is a switch for On/Off, a second one to switch between the two stations and a volume knob. That's all.

Written using the Arduino API and the AR1010 library from Adam Jansch. The frequencies are hardcoded to Deutschlandfunk and Deutschlandradio Kultur for Berlin Kreuzberg. Code: Media:Radio_due.zip

FooBoard_SMD: an Arduino compatible Breakout-Board for Atmega8/168/328… based on SMD parts.

AR1010 Breakout Board: a breakout board i made for the AR1010 module (AR1010 Module, currently difficult to get unfortunately).

The general Audio Amp from Jonathan Lock (unfortunately could not find original blog url any more) i modified for 1206 SMD components for easier soldering (instead of 0603 as in the original). Media:Radio_amp.zip

The case was built from 3 boards of laminated wood of size 170x250mm, and 18mm height. The front panel design (holes for the speakers) was generated with a magnetic particle system with particles of different weight and size. The boards where then milled on a 3 axis cnc-router. Media:Case_dxf_gcode.zip 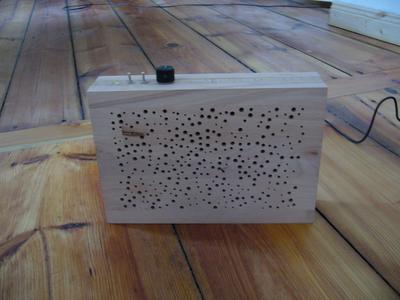 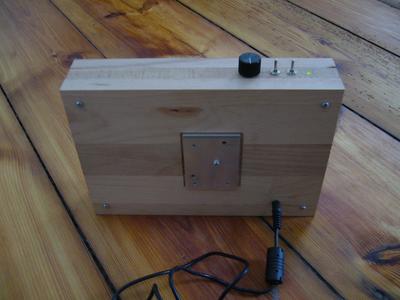