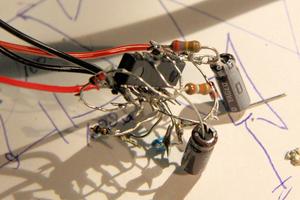 Urban Cricket is a small circuit that imitates the call of a cricket, only being powered by a small solar cell. The idea comes from Reinhard Gupfinger a Linz based artist I met during the Ars Electronica Festival 2011 in Linz. This circuit here is a altered version of his original circuit.


A video demonstrating the functionality can be found here:

Since it is hard to recreate a circuit not having a pcb an a schematic, people who want to recreate the Urban cricket will find the schematics, a layout to create a pcb and a parts list here.

Well, there are different options how to assemble the circuit. The "original" parts list was:

The bold faced parts can be changed to generate a different tone. Since the use of polarized capacitors for C2 and C3 is kind of unskilled (it works most the times especially when using higher voltage capacitors ie. 63 volts) it is better to use non-polarized capacitors. 10µF non-polarized ones are expensive and or bigger. So much smaller capacitors can be used when increasing the value of the corresponding resistor at the same time.

Other possible Values are:

The values should be matched among the 3 oscillators to prevent "chopping off" a tone (brrrr brrrr brrrr br or Brrrr Brrr B). So the values above are only suggestions of what could sound nice. Try to experiment, maybe use a potentiometer to change the tone on the fly.